HORIZONT is a software development company located in Munich, Germany. The company was founded in 1993 as R.O.S.E. by five OPC (until 2015 TWS, since 2015 IWS for IBM Workload Scheduler) consultants. Due to legal conflicts, the name was changed to HORIZONT in 1997.

The company’s first product was OPC/Graph (then TWS/Graph, now IWS/Graph), net plan display software for TWS, which was developed together with IBM Germany. With more than 150 customers worldwide, it has become the de facto standard for TWS compatible software. Additional products include IWS/BatchAD (TWS/BatchAD), IWS/BatchCP (TWS/BatchCP) and IWS/Audit (TWS/Audit), rounding off the TWS product line.

With the introduction of XINFO in 1997 (SmartIS in the US in 1999), HORIZONT took a big step into a much wider market. XINFO (SmartIS in USA and Japan) integrates with schedulers other than TWS, for example Automic (UC4), CA-7, CA-Scheduler, Control-M or ZEKE. In 2002 HORIZONT released DSN/Change and SmartJCL, which complete the product line.

HORIZONT became part of the Beta Systems Group in December 2014.

For more than 35 years, the name Beta Systems has stood for high-quality software products and solutions in the area of security and traceability in IT and for the automated processing of large amounts of data and documents. As a German company, Beta Systems is one of the leading medium-sized and independent software solution providers in Europe.

In addition to our company headquarters in Berlin and development centers in Cologne, Neustadt and Munich, we are active worldwide with our 21 own subsidiaries and numerous partner companies and generate about half of our sales internationally. 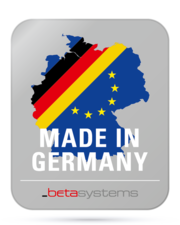 We use cookies on our website to give you the most relevant experience by remembering your preferences and repeat visits. By clicking “Accept”, you consent to the use of ALL the cookies. However you may visit Cookie Settings to provide a controlled consent.
Cookie-EinstellungenAkzeptieren
Cookie-Hinweis

Analytical cookies are used to understand how visitors interact with the website. These cookies help provide information on metrics the number of visitors, bounce rate, traffic source, etc.